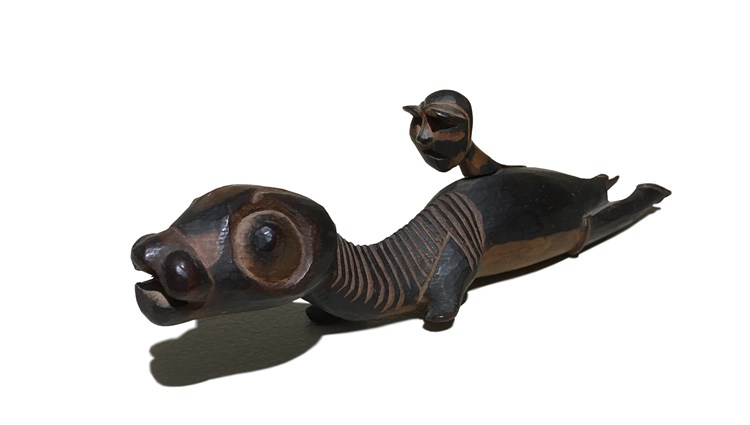 Knud Rasmussen, the expedition leader,  stated in 1933: « I feel I must express the same admiration for the gigantic work of my geodesists in the short time they had at their disposal; fjord after fjord, mountain after mountain, have been mapped by means of triangulations numbering more than 3000. The geological surveys have been led by R. Bøgvad M. A., who with the utmost thoroughness has completed detail investigations and collections at over 500 places in the sphere of our operations.
See : Geografisk Tidsskrift, Bind 36 (1933) 1-2. South-East Greenland. The Seventh Thule Expedition 1932. From Cape Farewell to Umivik.

Literature: A tupilak spirit could be called upon to help against a foe by a shaman secretly creating a figure made from various bones or other parts of animals. The figure was then inaugurated and became an abode for the spirit by singing a spell over it. The tupilak was often put out to sea so that it could find the enemy itself and kill him. However, this course of action was not without risk because if the tupilak’s victim had greater powers of witchcraft than its creator, he could repel its attack and instead send the tupilak back to kill its originator. In Greenlandic the word 'tupilak' means an ancestor's soul or spirit. Apart from the tongue, the tupilak has other recurrent visual features, such as the dilated nostrils, evocative of a predator’s sharpened senses or of its aggression; the symmetric lines on the face, partially a decoration, partially pointing back to (forgotten) tattoo traditions, and partially also literally wrinkles, even signs of starvation; the big eyes with a black pupil in the middle, that imitate the so-called “stressed eyes”, i.e. when the eye appears gaping, with dilated pupils; the visible ribs or spine – the tupilak as skeleton parts; and then its composite nature, made out of different animals and creatures.

A very rare and superbly carved Tupilak creature. This remarkable example is carved as a composite seal like animal with a human leg on the left and a seal flipper on the right. There is a mortised human figure with enlarged eyebrows (or a visor) jutting from the back of the seal. The seal’s head is carved with exaggerated features, flaring nostrils and enlarged globular eyes with black projecting pupils. The neck is striated, and the body is painted with strange black patterns. Ammassalik Eskimo, South East Greenland. Cedar wood with black pigment (right front leg broken and glued). 24,6 cm. Early 20th century.