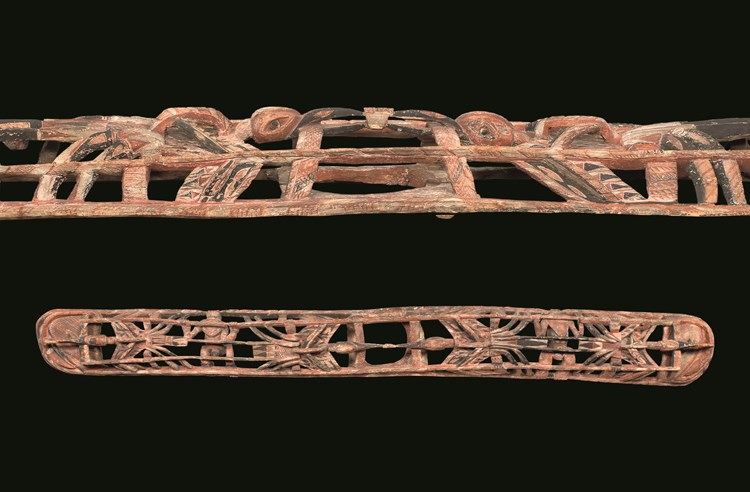 Provenance Collected in the field by the Count Rodolphe Festetics de Tolna (1865-1933?) between 1893 à 1896. Seized in 1914 by French customs. Acquired by Dr. Stephan Chauvet, (La Gaude and 35 rue de Grenelle, Paris) at the French Customs auction of seized WWI bounty in 1920. Offered for sale in 1950 by Jean Roudillon, 8 rue des Saints Père, Paris on consignment from Dr. Chauvet. Acquired in 1950 by Edmond Bomsel from Jean Roudillon. The Bomsel family by descent until 2015. As evidenced by letters exchanged between the two men, Edmond Bomsel was a bibliophile close to André Breton and artistic circles especially that of the Surrealists. He directed with Léon Pierre-Quint the editions of Sagittarius, especially between 1944 and 1951. There is a remarkable portrait of Edmond Bomsel painted by Jean Lurcat.

Literature: Count Rodolphe Festetics of Tolna was born September 17, 1865 in Boulogne sur Seine (now Boulogne-Billancourt), in the Paris region. He was the heir to an aristocratic Hungarian family whose parents lived in Paris. He spends the first part of his life in the French capital where he lead a very mundane life as a lieutenant of the Austrian imperial guard. It is in this context that he meets in 1889, a rich American heiress Eila Butterworth Haggin came to study in the French capital. He marries her three years later in New York and the couple quickly decides to prepare for a voyage in the Pacific.

This idea of ​​a journey emerges at a time when American newspapers regularly echo the maritime adventures of famous writers such as Stevenson in Samoa or Mark Twain in Hawaii. As early as August 1893, Festetics had his ship built by a renowned naval architect and named it Tolna as a tribute to the Hungarian castle of his ancestors. But it was only after several months of talks with the American administration, which were wary of the intentions of this couple whose husband did not have American nationality, that the ship is put in the water on October 9, 1893. The Tolna, with the Count, the Countess, Captain Wichmann and a crew leave from San Francisco. The presence of a captain seems necessary, the Count not knowing how to navigate. From this date, and because of the social status of Eila Haggin (heiress of a wealthy mining family) the couple's adventures were widely relayed in the American press announcing sometimes even the death of one of the protagonists as well as mutinies.

The trip lasted eight years across the Pacific and Indian oceans before the ship was stranded on a small island in the Maldives (Minicoy). In the meantime, the couple were separated in October 1898, and Mrs. Haggin returned to her family in the United States. Count Rodolphe continued the adventure which ended on February 11, 1900 with the wreck on the island of Minicoy in the Maldives. This odyssey spawned two books: "Cannibals: Eight years of cruise in the pacific aboard the yacht Tolna" and "Towards the wreck of Minicoy". A total of 1,600 items collected by the Count were transferred to the National Museum of Budapest. In 1914, the Austrian nationality of Rodolphe caused him trouble with the French authorities who confiscated his property including the present lintel. Doctor Stephen Chauvet, a famous collector, acquired the entire seized holdings from the French Customs at auction after the war and dispatched many of the art-works through his contacts notably antique dealers (Jean Roudillon), the Musée de l’Homme in Paris and especially the Museum of La Rochelle directed by his friend Etienne Loppé. Count Rudolphe Festetics de Tolna died in Paris on May 4, 1933.

Large horizontal Malagan frieze, or kobo-kobor, from an initiation house. It is composed of multiple anthropomorphic and zoomorphic imbricated figures. These frieze, or lintels, are usually carved symmetrically extending outward from a central focal point, in this case a hollow circle representing the all-powerful vavara malagan. The ends are carved with representations of large fish symbolizing death, while the rest of the sculpture is made up of a multitude of overlapping birds with long extended feathers. The bodies of two ancestral figures, having unfortunately lost their heads, are also part of the composition. A very similar frieze, collected between the end of the 19th and the beginning of the 20th century, is preserved at the Ethnologisches Museum in Berlin (inv.VI57383). New Ireland, Bismarck Archipelago, PNG, Melanesia. Wood (Alstonia), pigments, putty nut, and turbo-marmoratus opercula. Minor consolidative additions to the rear. Minor lacunae due to age and usage. 296 cm long.