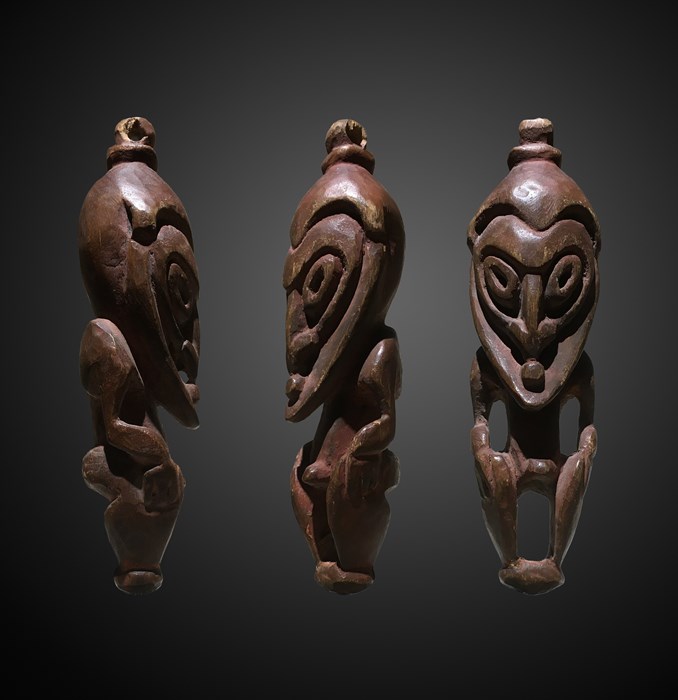 A very early beard amulet figure representing a male ancestor. He is powerfully carved standing with arms akimbo and hands to his hips. The very large head represents more the half the total height of the figure. The face is of classical style with large slanted coffee bean eyes and aquiline nose over a minute mouth. There is a pierced topknot on the head for suspension. The rear of the figure is well carved showing pronounced shoulder blades. These minute figures were worn attached not only to the man’s bag but more often were worn in their beard.

Ralph Linton (1893 –1953) was a respected American anthropologist of the mid-20th century, particularly remembered for his texts The Study of Man (1936) and The Tree of Culture (1955). One of Linton's major contributions to anthropology was defining a distinction between status and role. He was a member of the Bayard Dominick Expedition led by E.S.C. Handy under the auspices of the Bishop Museum to the Marquesas. While in the Pacific, his focus shifted from archaeology to cultural anthropology, although he would retain a keen interest in material culture and 'primitive' art throughout his life. He returned from the Marquesas in 1922 and eventually received his Ph.D. from Harvard in 1925. He was a major contributor to and co-curator of the ground breaking Arts of the South Seas exhibition at the MOMA in New York in 1946 along with René d’Harnoncourt and Paul S. Wingert.